A social movement based on Islamic principles to be viable in Bangladesh needs to experience a paradigm-shift in the approaches of understanding Islam. The Islamic movements that have been working around the world were formed in the first two/three decades of twentieth century, we know. These ‘Islamic movements’ were highly influenced by the then colonial situations, totalitarianists’ success and prevailing religious puritanism.

After, around a century, all it needs a radical change in the underlying attitude towards the understanding and in the approaches of interpretation of Islam and Islamic movement.

The proposed new paradigm of Islamic thought has been elaborated in the ‘Social Movement from Islamic Perspective’, published at cscsbd.com. So, a detailed discussion is avoided here.

Intellectuality: As Islam itself, this sort of movement has to be a movement based on intellectual practices. It’s not a problem that everyone is not highly educated or doesn’t have enough time or sufficient mentality for intellectual speculation. When the declaration of Kalima-e-tayyiba is an outcome of consistent rationality, then formal patterns of intellectuality is not a must. Instead, everyone has to have an intellectual mind. So that, people normally finds the hoque (the truth or right-one) in their commonsense. Any sort of extremism, rigorism and religiosity must be avoided. In matters of religious controversy, an accommodative position is preferred.

Practice: Practice (aml) is the demand of rationality and the core part of intellectuality. Conceptual clarity is a per-condition of doing the right thing. Intellectuality through activism – should be the motto of the movement.

The pioneers of social movement based on the ideology of Islam has to adopt two seemingly opposing characteristics:

(1) For promoting an idea or understanding a problem or extending any help to someone, they need to be highly proactive, at least to perform his/her part in that issue.

(2) In matters of selecting any formal leadership or forming any committee, they should wait until situation compels to do it.

Honest Competition: Leadership competition is a natural phenomenon. So, a free, fair and honest competition of leadership is a must. Over-submissiveness is, in a sense, ‘un-Islamic’. Leadership-competition and organizational split-ups should be taken fairly. If the conceptual aspects are grossly same, every split will nourish the movement and must contribute to the development of the society. It is the flavor and fruit of pluralism. The singularity or oneness is in the core aspects of Islamic beliefs, not in the mode of more practical policies of any social movement.

Committee: It may be an umbrella organization of different local or nation-wide organizations comprising a convening or a working committee and an advisory committee.

Leadership: Leadership of such a movement has to be non-authoritative, non-cadre & pro-people. No one should be allowed to lead for an unlimited period of time. Let others check their potentialities in the meantime. So, there must be a gap of two years after one has led for a tenure of two years or two tenures of one year. The process of leadership-selection must be non-confidential and properly distributed.

Prior agreement on the target people is one of the most important aspects of any social movement.

Peoples’ Divided Sentiments on Islam: In Bangladesh, there are non-Muslims, anti-Islamic so-called Muslims, moderate-secular Muslims, and moderate Muslims. There is a huge percentage of pro-Islamic people both organizationally involved or not. There are various Islamic organizations as well. From Jamaat-e Islami’s perspective, there are two major factions: Jamaat with its side-organizations and anti-Jamaat ones like Tabligh Jamaat, Hefajot-e-Islam and pro-shrine Islamists.

Three Options: So, the new wave of ‘Islamic movement’ has three options. It can prioritize or focus on any one of the following:

a. Mainstream of the society;
b. Pro-Islamic portion of the citizens; or
c. The existing manpower of traditional Islamic movement, namely, Bangladesh Jamaat-e Islami.

It will be a gross-mistake to over-look this sort of prioritizing or to work vaguely in a generalized fashion.

Mode of Recruitment: If the new social movements like to go for option the first option (a), that means, organizational recruit from the mainstream of the society, then they have to criticize the Islamic forces, in concerned situations.

Then let’s consider second alternative. It means, when the new sort of social approaches fixes the pro-Islamic portion of the people (b) as their prime-target, then they should not unnecessarily defend the traditional Islamic movement (JI). Instead of this two, if the target people from Jamaat-e-Islami then, any criticism of JI should be avoided.

Not only in expressing opinions, this sort of prioritizing is utmost urgent in adopting pragmatic plans and course of actions. In either situation, Islam should not be practically identified with any organization no matter how much ‘Islamic’ it is.

Centre for Social & Cultural Studies (CSCS) would like to promote its pattern of social movement, though the name is not fixed yet. But the peers of CSCS has already agreed to focus on the mainstream of the society; and then the general Islam-loving people. CSCS team has also agreed to avoid approaching those who are already attached with any Islamic organization. The self-interested ones are always welcome.

Common Ground of Cooperation: Whoever is doing a good job, better for the society, not declared haram (strictly prohibited) in Islam, it is the duty of every Muslim to participate and strengthen it. If the issue is partially authenticated in the Sunnah but detached from the concerned holistic context then, it is important for the people of understanding just to avoid it. If possible, necessary measures to correct it should be taken from a proactive point of view.

Understanding of the Commoners: As we see in Sunnah in the Meccan period, Prophet Muhammad (sm) has avoided every sort of conflict. In the line of this guideline, let’s consider situation of Bangladesh. Most of the people are not clear about the inherent meanings of the basic tenets of Islam. They are Muslims, mostly, by census-statistics. The first or early generation of Muslims in this locality were convinced by the spirituality of the Muslim saints. We know that they embraced Islam to get rid of the then social inequalities. So, Islamic workers must approach the society with profound spirituality and sincerely fight against existing social exploitations and inequalities. With these, they need to clarify the true meanings of the basic tenets of Islam. So, a total change in the understanding of Islam, which we have mentioned as paradigm-shift is earnest requirement.

Correction in the Understanding of the Different Islamic Organizational Activists: The activists of traditional Islamic organizations, by and large suffer from various conceptual marginality and extremism. Though most of the organization-stakeholders are clear in their understanding of Islam from within, that means, true aqida; but they have no clear idea about how to lead the society accordingly. Unfortunately, they are running with around a century-old primitive ideas and strategies regarding the social applicability of Islam.

So, massive correction is the demand of time. The guiding principle for the expected social change should be as follows: merely being right, good or needful; is not sufficient for something to get involved with it immediately.

So, no conflict with anybody else. Any sort of practical politics should be avoided carefully, for two reasons:

Models are Always Local: Principles should not be mixed up with models. Practically we can’t do something effectively unless we have a model of it. On the other hand, any model, whatever it is, is built for a society which has some unique features. Ina different locality, various social aspects could be different, even opposing. A model of social movement could be suitable for a locality or country where tribal system is well established. May be, elsewhere, suppose, in a western or westernized civil-democratic or homogeneous society, that model is not working properly. The influence, consideration and continuity of any nation’s specific historical, anthropological, economic, spiritual, environmental, cultural, literary and intellectual aspects, is a must in presenting a suitable model for them.

Need for Independent Models: Though Islam is for all time to come, yet the practicalities are so important that a slightest change in the sequence of actions could turn the whole meaning of Shariah. Islam’s eternity lies in its sanctioning more liberty in social aspects (muamalah). Except in pure religious matters (ibadah), Islam mostly fixes the necessary principles. On basis of those principles every society, locality and age has to build its own kind of model.

Who is the Mentor? In Bangladesh, we don’t have Tariq Ramadan as for Europe, we don’t have Yusuf al-Qaradawi as for the Middle East. We didn’t have a Sayyid Badiujjaman Nursi of Turkey, we have no Rashid al-Ghanushi as for modern Tunisia and greater Africa. Can we wait for a great leader to come? No. Neither from Non-Islamic perspective, nor from Islamic perspective, is nobody freed from observing social obligations.

Think Tank System: In absence of any mentor, a group of scholars and experts are responsible to present a ‘Bangladesh Model’ of social movement. We know, when the liquid of glass is cooled down quickly, it becomes more vulnerable, breaks also easily. Likewise, no hurry for ‘reaching the people’ when any fatal conceptual flaw is there. On the contrary, engaging in aimless, inactive and airy ‘thoughts’ – is never expectable.

So, collective Intellectual practices in the form of interactive discussion, is the way out for the present mentor-crisis. Let’s form pockets of think tanks here and there.

9. Some Areas of Social Works

Preamble: If anyone considers that Islamists’ ‘failure’ in Bangladesh is basically activism related, he or she may engage in any form of social work under an Islamic banner or with a normal (secular?) identity. The CSCS team has no objection, but good wish for such initiatives. To our considerations, we need to get radical reform programs for Bangladesh. Along with it, a massive wave of changes in the understanding of Islam is necessary.

If we analyze our society it will reveal that Bangladesh is much more prospective for Islam. Islam is the religion of the brute majority here in Bangladesh. It is the duty of the competent social workers to eradicate the misconceptions about Islam. Islam-phobia and Islam-likeliness is counter balanced here. The moral integrity, knowledge superiority and worldly capability of the Islamic workers must be established. Though it seems that it is a far-reaching goal, consistent and all out efforts can make it possible.

It is very easy to criticize any established organization, but it is very tough to do something constructively. Success is not always what we see immediately. From Islamic point of view, a true believer (mu’min) contends and waits for the reward in the hereafter.

The Almighty has set some specific modes and systems to run this world. So, if someone, may be a group of people gives endeavor to build a just-society, obviously he will be successful. Allah has given His commitment to give necessary worldly power to the competent ones, no matter they are believers or not.

So, it is the part of person to devote himself or herself in developing his or her potentialities. The development of quality, necessarily includes and implies social contribution and development. Both in Islam and non-Islamic discourses, social responsibility is always personal. Everyone is accountable for his or her part of the collective rationality and responsibility. So, there is no scope of blaming others, no scope of ‘blame game’ and no room for any ‘conspiracy theory’.

Well, let’s work. We need to learn to do and we learn by doing. Building a better world is never impossible, provided the necessary approaches are there effectively. 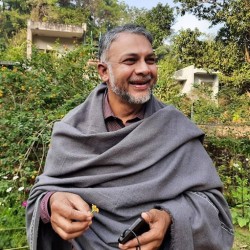 Try to be a trend setter. At least, follow your own style. Don't be a trendy person. Social media trends are superficial, and only...